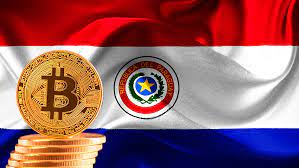 After the decision of Nayib Bukele to Legalise Bitcoin and adopt Bitcoin as a legal currency parallel to the dollar, it influenced many countries’ governments to adopt Bitcoin.

No doubt that El Salvador is facing lots of problems after Legalization of bitcoin, like support to design infrastructure of Bitcoin by the World Bank and payment of salary in Bitcoin.

Related: WorLD bank will not support El Salvador to help on Bitcoin infrastructure.

But still there are many advantageous factors which are far better than these problems.

Here Paraguay is another country of American region which is looking to Legalise Bitcoin soon.

The National Deputy of Paraguay tweeted a tweeted where they clearly said that they will “ introduce legislation for Bitcoin adoption by next month”.

It is not shocking news for us because already many social media experts were claiming that soon other states of American region will start to adopt Bitcoin as a legal currency.

And now we can see that the same is happening.

According to social media reports, The government authorities of Paraguay are doing analysis at ground level about Bitcoin and also infrastructure for bitcoin use.

Probably the delay to Legalise Bitcoin in Paraguay is taking time because of the planning to face the challenges in a perfect way.

Because here always the government of El Salvador is facing many problems.

Many opposition politicians are against the decision of Nayib Bukele to Legalise Bitcoin as legal currency and also many political pressures are forcing the World Bank to not to support the El Salvador government to make good Infrastructure to make Bitcoin adoption perfect.

Well here we can say that on one side El Salvador is facing criticism by the opposition but on the other side they are getting much better support by other states of American region especially by Paraguay and also they are getting lots of support by the public of Salvador.