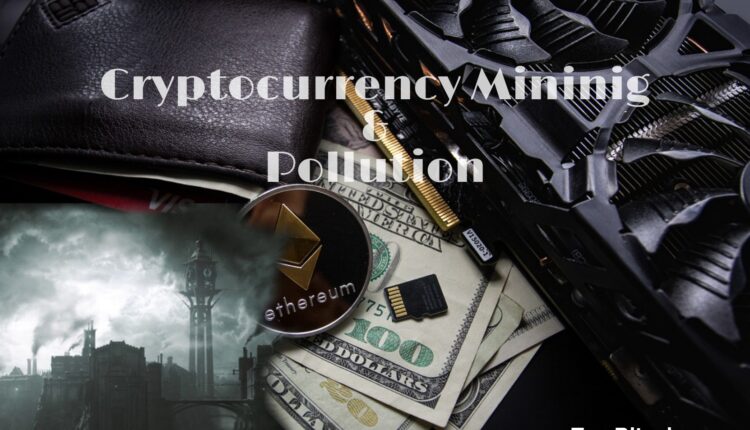 Carbon footprint means the worst emission in the earth atmosphere in the form of carbon dioxide.

In this field of cryptocurrency, Cryptocurrency mining is highly responsible for carbon footprint.

Cryptocurrency mining is based upon the GPU process to solve the problem as a validator ( in mining procedure).

Cryptocurrency mining hardware uses power in the form of electricity.

And that electricity is produced mainly by burning coal.

Burning of coals are Highly responsible for the carbon dioxide emission in the earth’s atmosphere.

Alternatively we can say carbon footprint is a pollution level because of increase in the level of carbon dioxide in earth’s atmosphere.

Year by year the technology of blockchain consensus changes.

Revolution in Blockchain consensus is responsible for the high efficiency in blockchain based cryptocurrency transactions.

But as all of us know very well, Bitcoin is the first cryptocurrency which is based on traditional blockchain consensus proof-of-work.

Bitcoin is based on the traditional technology which was developed for the first time by the Bitcoin developer team.

And on the other side, users of Bitcoin are in very high numbers.

And also Halving concept is responsible for increase in mining difficulty.

So overall all these factors are responsible for very high difficulty to increase transactions fees and mining cost.

Related: What is Bitcoin Halving? How to take advantage to make money with halving upcoming news?

Factors Which Are Responsible For High Carbon Footprint Beside Cryptocurrency

Consumption of electricity is a mandatory need of human beings. And we can’t spend our life without electricity.

There are many sources of electricity generation.

Wind energy, Nuclear Power plant and Solar Power plant are cheapest sources of energy but to make the plant to generate energy costs a good amount of money, that is not affordable by common man in this world.

So most of the electricity source is generated by coal plants.

Coal plants are a traditional and cheapest method to generate electricity.

Since the cost of electricity per unit to spend is low but it is a big it costs much to our earth’s atmosphere.

Due to burning of coal in Coal Plant, lots of worst emissions including a high amount of carbon dioxide take place.

The increase in the emission of carbon dioxide level day by day makes earth’s atmosphere the worst environment for human beings.

So our basic needs are responsible for big damage to the earth’s atmosphere.

Here electricity consumption in our home is not only part of the carbon footprint level increase but also all types of another form of energy are responsible in the same manner.

How much electricity does Cryptocurrency use?

We can use renewable sources of energy like solar energy.

Initial cost in a mini solar power plant is high but usually your return of Investment took 3-4 year at max.

And after that we can grab lots of free electricity for 20-30 years at least.

Because wind power plants can be implemented in those areas where weather is windy and there is enough land available.

For example we can try our best to avoid Ethereum and Bitcoin like cryptocurrencies. Because these types of cryptocurrency are based on traditional consensus and are not much efficient in comparison with the present time highly improved consensus.

Q. How does Bitcoin have a carbon footprint?

Ans: Mining of new coins and validators plays an important role in the cryptocurrency transactions. So mining cost in the form of electricity consumption is a responsible factor for carbon footprint level.

So we can say ” how does Bitcoin produce CO2″.

Q. Why is Bitcoin bad for the environment?

Ans: Actually Bitcoin is not bad. Our need is bad. Bitcoin is our basic need like electricity. There are numbers of websites to educate us, while one website is enough to provide information. So we can’t say Bitcoin is bad.

But still carbon footprint level is a responsible factor of Bitcoin mining.

Ans: As Marketcap of Bitcoin is $806.88 Billion and DogeCoin Marketcap is $62.2 Billion. So from this data we can say DogeCoin has approximately 14 times less carbon footprint level then Bitcoin.

Q. What is XRP Carbon Footprint ?

Ans. In actuality we can’t see personal wallets to use for xrp coin, so people are mostly using this coin for trading instead of transaction purposes as payment options.

So XRP has almost no carbon footprint.

Q. Can we make the Bitcoin environment friendly?

Ans: Yes, we can. We just need to use those options for the transaction of Bitcoin which are cheaper and faster to make payment from one wallet to another wallet.

For example we can use a Bech address supporting wallet. Secondly we can multi-Signature wallets to make payments, which terminate the main blockchain involvement process by keep a record of data in the blockchain.

Q. Is it possible to make DogeCoin a high efficient cryptocurrency?

Ans: Yes, it is possible. Developer team can shift the DogeCoin to another consensus by relaunching DogeCoin.

Another possible option is to put DogeCoin on the TRC-20 network.