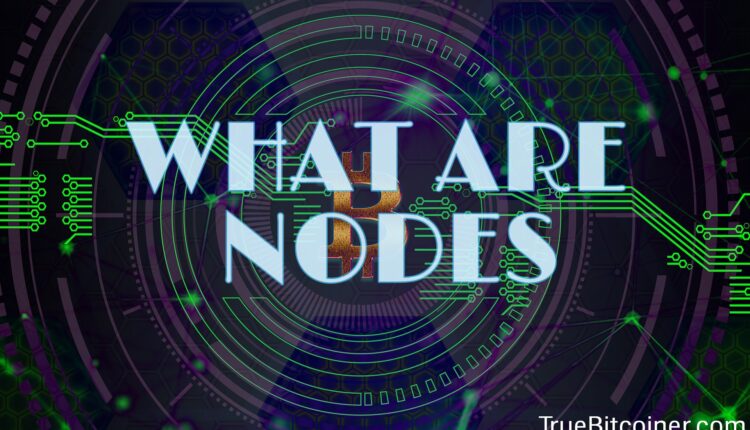 Meaning of Node is empty space. But in the field of technology, nodes are redistribution points or end-to -end communication points for a network system.

According to the need to implement new concepts and the need to improve technology, a network designer can design a node system in practical or virtual form.

Definition of Node Point may vary from one field to another field. Here we are talking about node points in the Crypto world for Blockchain technology.

In a network at node point messages can be created, received and transmitted.

Here we will talk about different types of nodes in Bitcoin : full nodes, supernodes, miner nodes, and SPV clients.

So we can say the designation of blockchain is designed as a distributed system.

This distribution system enables bitcoin to be used peer-to-peer without involvement of a middle-man (no matter what is the location between these two people).

So, Blockchain nodes act as communication that enables the whole network to perform different functions.

A device or computer that is connected to the bitcoin interface can be considered as a node point.

So in this way if a  person wants to transfer Bitcoin to another person then at another side the beneficiary user should be connected to the bitcoin interface.

Each type of node is designed to perform a particular function.

Here in bitcoin node, it should be noticed that we are not restricted to send or receive bitcoin. But also we can perform a few other functions according to coding by the developer.

In bitcoin nodes, nodes transfer not only bitcoin but also information about blocks and details of sender and receiver, which remains public to everyone.

Here it should be noticed that any person can design his own bitcoin node and can make it able to perform different types of functions according to his own concept.

For example, the signature verification system of Blockchain technology was later designed to prove ownership of bitcoin wallet or private key.

These nodes also participate in the process of verification of transactions and blocks against the rule of consensus technology.

Here consensus means algorithm rules instruction path, consensus will explain to the transaction how to proceed.

Consensus of Bitcoin is proof-of-work.

Full nodes have the ability to broadcast new transactions and new blocks to the blockchain network.

The main function of full nodes is only to provide security to the data of transaction history.

History of blockchain data is not a mandatory part of a transaction, but still it is need of people who want to see history.

So full node downloads a copy of Bitcoin blockchain with every transaction and block.

Anyone in this field of cryptocurrency can run a full bitcoin node on a PC or laptop to support the network of Bitcoin.

You can check these essential requirements here.

Running a bitcoin core on a pc is a beneficial option in two ways. On one side we don’t need to pay high transaction fees and on the other side we can get rewards to support the system. But getting a reward is not exactly defined for a particular user. All depends upon the probability factor.

Full nodes may be publicly available or privately available. For Bitcoin full nodes are publicly visible but we can see most of the coins in Cryptocurrency market having full nodes in non-visible form.

Supernode is a full node which is always publicly visible to everyone.

Supernode is a distribution point that can act as a source for data transmission and also can act as a pool between two points of data source.

Supernode is an example of a full node, but here supernode is different from full node by its reliability to run.

Requirements to run supernodes on a pc or hardware system are higher.

In a full node system, we have to run our PC for 6 hour at least but In case of supernodes we need to run a PC for 24 hours continuously and also better specifications of PC hardware with much decent super speed established internet connection.

So to run Supernode we need to spend a high amount of electricity and money for a better level of hardware system.

Miner’s nodes are specially designed programs that help us to mine bitcoin mining.

In the present time Bitcoin mining is a very tedious job, so if a person wants to earn in bitcoin mining then he needs to invest a decent amount of money in specially designed hardware and a program to run Miners node.

Anyone in this world can run Miner’s node individually or in a group.

Individual mining is known as solo mining and mining in groups is known as pool mining.
We have a separate dedicated article about Cryptocurrency mining and pools, check here.

These are also nodes like full nodes but not full nodes. These clients make use of the Bitcoin network like a full node.

And also they don’t have any function to give security to the system.

The main work of Lightweight clients is to take information from the full nodes or supernodes to check whether transactions are included in the block or not.

So SPV clients or Lightweight client’s functionality depend upon the information given by full nodes or supernodes.

These nodes are very common in use by the bitcoin wallets.

Summary Of The Article:

Nodes are point to point connecting junctions where nodes have ability to receive and transfer data from one to another node ( peer-to-peer).

There are different types of nodes in a single distributed system. Each node performs its own function.

Few of them are engaged in validation, verification and security to the system.

And few of them provide information about transactions of data without going through the whole system.

And few of them are specially designed to mine new blocks ( Bitcoin mining).