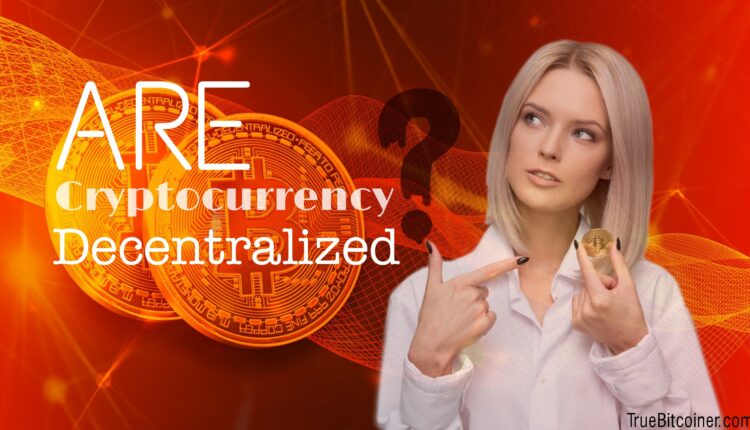 Since we already covered an article about decentralisation of cryptocurrency. Where we explained that more than 80% of the cryptocurrency is centralized.

Since our last article about cryptocurrency decentralisation is based upon the use of the power of money.

Misconception About Blockchain As Centralized Technology

Let’s talk about those factors which are responsible to think about Blockchain as a centralized technology.

Most of the miners are earning through the mining reward by mining the blocks.

We have seen in the history of cryptocurrency many times, when a particular country banned mining activity in their countries, then support for the Bitcoin network became down and that resulted in the stalling of the transactions in bitcoin.

So here we can say these are miners who are controlling the transaction system.

So how can we say that Blockchain technology or blockchain based projects are decentralized.

From the very beginning in this cryptocurrency field, we are trading assets at our desirable price ( limit buy and sell order).

To get buy and sell facility at limit buy/sell order, we need to use traditional finance exchange. And these exchanges are 100% centralized.

No matter how much they can provide safety to our funds but still these exchanges are in control of the owner.

And also in the present time many countries’ governments are forcing these exchanges to give all the details about the users and their buy and sell turn over.

Since the last two year, we are able to do trading at Defi exchanges, which are almost fully decentralized.

But Defi exchanges are still in the development phase and we can’t trust them fully because they involve many types of disadvantages like pending of swap of coins and take too long time to reverse the funds in the wallet and also flash loan attacks are also big measure issues in Defi concept.

Related: Advantage and disadvantage of Defi based projects.

Basic technology of Blockchain is started with the proof-of-work consensus but after that many consensus entered in this field and also many of them are in development phases to solve the scalability factor.

But here if we talk about those coins which are available on Proof-of-work consensus, then we can see a big measure issue of 51% attack system.

Actually a fork can take place in the blockchain algorithm of cryptocurrency, when the majority of the miners will follow another rule and few other rules.

In history we can see fork in Bitcoin where forcely fork happened ( since alternative chain was not considered).

So a powerful person who can control miners through his money power or from something else can fork in coin’s and can make new coins.

So it is also a type of centralisation in blockchain technology.

Related: Read about POS and POW consensus in detailed explanation.

But at the end the owner of the blockchain program owns the whole ownership of the cryptocurrency.

People are not able to mine cryptocurrency and also people can’t see all types of source code that are used in the existing POS and POH consensus based cryptocurrency.

So how can we say Proof-Of-History and Proof-Of-Stack based coins are decentralized.

Here we are not blaming all the coin’s team for not providing source code.

These are networks which are allowing coins to transfer at very high speed then existing traditional technology in Bitcoin or omni networks.

But we can see at one side these are totally controlled by a team or individual and they are not allowing anyone to support the network ( running nodes ).

So we can say that the whole network is in control of Single person or single team.

So it is also a type of centralisation in cryptocurrency technology.

We are not totally against this system. Since at one side they are not in favour to make the cryptocurrency and their use method in decentralized form but at another side they are highly efficient for use from the point of high transaction speed ,less transaction fees and security to the network by not exposing source code in public platforms.

In actuality all the real cryptocurrencies whether they are based upon proof-of-work, Proof-Of-Stak or Proof-Of-History are decentralized.

The privacy to the source code of the new consensus in the blockchain technology is totally hidden to provide security to the system.

No matter how perfect a developer is in his work, there remain few loopholes that can be a big issue in security.

So it remains better to not expose the source code in the public domain. And keep modification in loopholes through new improvement work.

Second thing is 51% attack. This attack loophole system can be removed through the use of Proof-Of-Stake or history consensus.

But as we know we can’t alter the existing technology, since there are options to relaunch the cryptocurrency at another consensus.

All of us are fully responsible for this attack system. On one side all miners should be honest at their job and on the other side if we know that any fork that takes place forcely then we should not give attention to the new alternative chain.

Third thing which is control on the transaction speed by miners is totally regardless of the point of considering Blockchain as a centralized technology.

Because miners are just supporting the system of blockchain and getting money for their support.

And here centralized means is full control in the individual hand or group of people.

But here in this world, everyone’s free to do mining, so how we can say mining activities is making cryptocurrency as a centralized system.

We can understand this thing through an example. Look in the picture given below.

Here two people are users of Bitcoin and pipe is acting as Blockchain consensus. And pulleys are nodes( miners).

Now look in the picture given below, here in this picture we can see the pulley is making a pipe down at one side and up to another side, so that the ball can travel from side B to person A.

Here it should be noticed that pulleys are not controlling the ball. Pulleys are working as a helper to make transactions. And also we can see that there is no middle man between the movement of the ball from one person to another person.

Here the function of nodes for the miners is almost the same. Running nodes means miners are supported for doing transactions but not interfering with the actual data in the blockchain program.

So here Everything is clear, Cryptocurrency is supported by all the people and everyone doing demands of buy and sell.

No one single entity is responsible for the price of particular cryptocurrency.

Japan’s First Ever IEO In Cryptocurrency